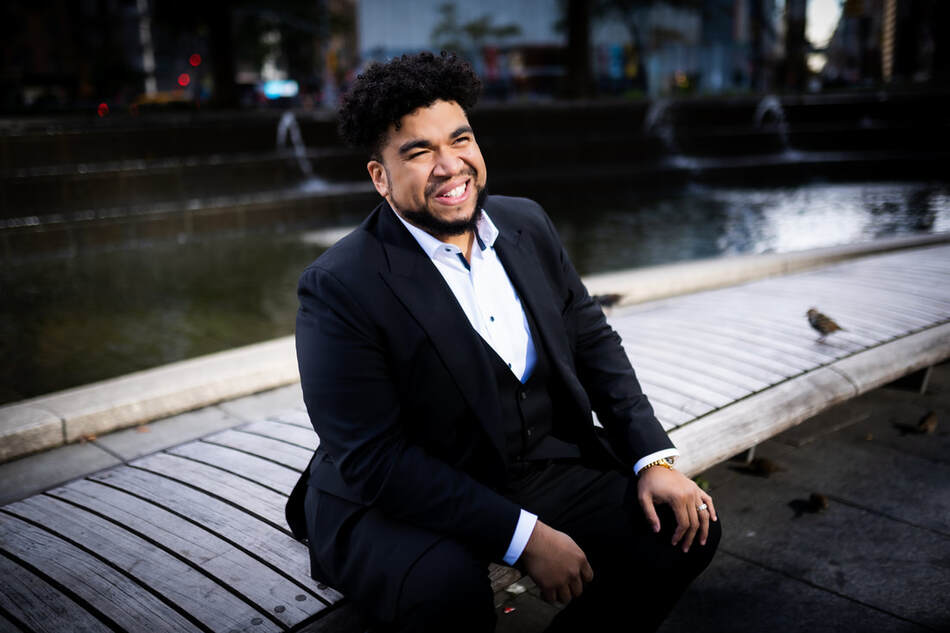 ​               "The ultimate gratification of the August 22 performance was Chaz'men
​                 Williams-Ali's unscheduled handling of the role of the poet Rodolfo......
​                 Williams-Ali's honesty, emotional clarity, behavioral specificity, and, above all
​                 his weightless, and soaring lyrical vocal lines made this a matinee to
​                                                                                remember and treasure."-Myscena
Chaz’men Williams-Ali is a young tenor from St. Louis MO. He attended Central Visual and Performing Arts High School and studied with two of St. Louis’ finest instructors, Dello Thedford, and Yvonne Crockett. While studying at Central, Chaz’men joined the Opera Theatre St. Louis Artist-in-Training program where he studied for two years.  Chaz’men went on to study voice at the University of Iowa School of Music. There he studied under Prof. Stephen Swanson and coached with Shari Rhoads. Chaz’men made his professional opera debut in 2008 in Gilbert and Sullivan’s The Gondoliers with Cedar Rapids Opera Theatre. In 2009, Chaz’men was named the Grand Prize division winner in the National Association of the Teachers of Singing (NATS) competition. At the University of Iowa, Chaz’men excelled in the music program participating in many operas and oratorios. He starred in productions of La traviata, The Elixir of Love, and Gounod's Romeo et Juliette at the University of Iowa.  In 2017, Chaz'men was very proud to return to the Glimmerglass Festival family as one of this season's Young Artists following the 2016 season's success as Giles Cory and stepping in as Rodolfo in La boheme. He also made his Kennedy Center Debut with Washington National Opera's Emerging Artist performance of Madama Butterfly  as Pinkerton this spring. 2018 saw Chaz'men returning to the Kennedy Center for a role debut as Don Jose with Washington Chorus under the direction of Maestro Christopher Bell. He was very excited to return home to St. Louis after his time in AIT to be a Gaddes Festival Artist with Opera Theatre St. Louis and perform the role of Jazz in Blitzstein's Regina alongside Susan Graham and James Morris. Following successful debuts at English National Opera and Dutch National Opera, Chaz'men also enjoyed success in his first season in the ensemble at Theater und Orchester Heidelberg in 2019-2020 where he reprised his role as Pinkerton among other performances. In the Covid-19 affected season, Chaz'men added Canio in Pagliacci to his list of performed roles in Heidelberg. In 2021 Chaz'men made his Metropolitan Opera debut in Die Meistersinger von Nürnberg under the baton of Maestro Pappano.  Chaz'men has also experienced success in recital and concert as well as music director, having directed and conducted for companies throughout the Midwest. Chaz'men is very grateful for the blessings that the Lord has bestowed upon him, and is looking forward to watching Him work in his life for many years to come.
​